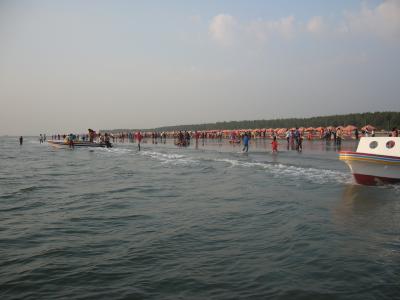 The main reason to come to Cox's Bazar is to visit the beach. This is the longest and shark-free beach in the world. Though a tourist town, Cox's Bazar has very little directed specifically to tourists. The Handicraft emporium at karupannya Cottage Industries at Motel road has a variety of excellent handicrafts. Saris, Lungis, Shawls and Kurtas are beautiful to buy and collect.

The colorful Buddhist Water Festival takes place from 13th to 18th April every year. To attract the tourist , The Government , in 1994, began construction of a road along the beach from Cox's Bazar to Teknaf. As of late 1995 it had reached beyond Himchari Beach.

The evergreen and semi-evergreen tropical rainforest bordering this stretch of beach is still some of the best in the country. Inani Beach is considered the world's longest and widest beach.It's 180m at the narrowest at high tide and 300m at low tide.Inani is some 30 km south of Cox's Bazar.

Himchari is the nicest beach near Cox's Bazar. Malumghat, an hour north of Cox's Bazar, is well known for the Baptist missionary hospital. Ramu, 14 km east of Cox's bazar, is noted for her Buddhist Khyangs.The interesting Burmese Bara Khyang, 50 km north-east in the Hill Tracts, in Lama Bazar has the country's largest bronze statue of Buddha. 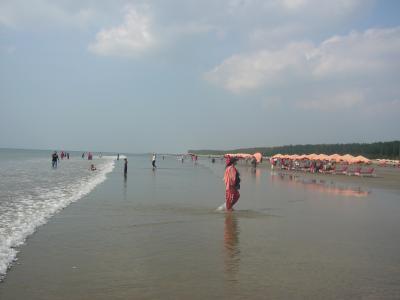